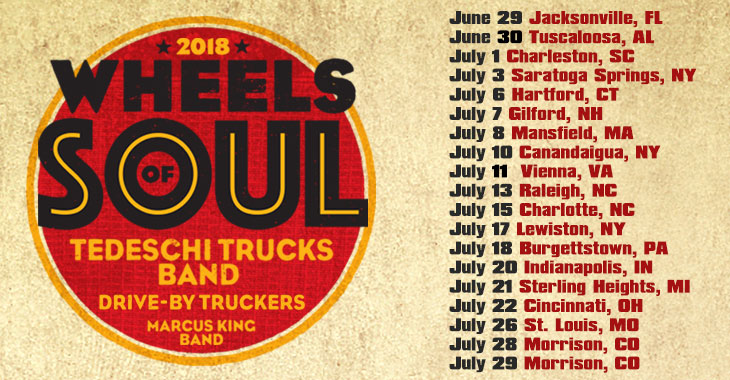 The Wheels Of Soul Tour rides again this Summer with another all-star triple-bill featuring Tedeschi Trucks Band, Drive-By Truckers and The Marcus King Band. The unique musical experience that is the Wheels of Soul Tour is set to reach new heights with this incredible lineup of artists, all with deep southern roots, and all with influences that reach around the globe.

“We all draw from some of the same roots,” says Derek Trucks. “But we also share a different perspective than your typical southern rock bands do. I have a lot of respect and admiration for the Truckers’ songwriting. It’s an honest take on the world we live in.” In King, Trucks is reminded of his early days as a talented guitar player plugging away on the road. “It’s been fun getting to know Marcus and watching him develop. He sat in with us at the Beacon and it will be great to have a chance to collaborate more on stage over the summer.” Trucks and King also collaborated on The Marcus King Band’s self-titled 2016 release, for which Trucks recorded on “Self-Hatred.”

The excitement over hitting the road is mutual. “An amazing band and great folks. It’s going to be a blast,” says Patterson Hood from Drive-By Truckers. From King: “Two years ago I saw Doyle Bramhall II, Sharon Jones & The Dap-Kings and TTB in Charlotte, NC. I felt the electricity of the show through every part of me and said, we need to be part of this tour. It’s a blessing to be part of the energy this year.”