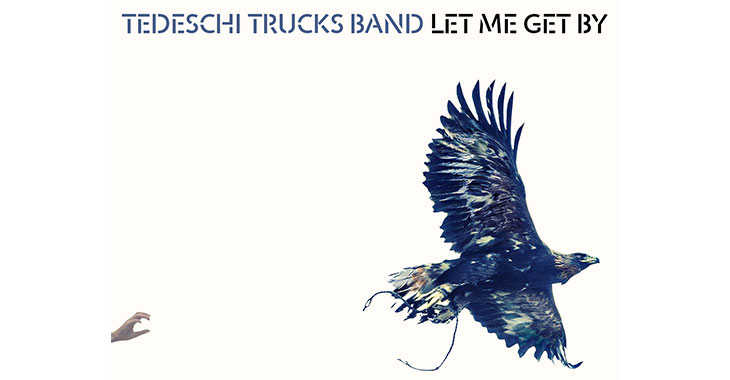 We’ve been waiting to share this with you for a long time: Let Me Get By is available today, in stores and online retailers everywhere:

Let Me Get By is the third and latest studio album by the TTB, featuring ten new, original songs that together stand as a testament to the hard work, independent spirit, and now full-on commitment of the husband-and-wife team of Derek Trucks and Susan Tedeschi, plus the musicians and music professionals who are part of the band’s ongoing journey. The album’s artwork—a Mongolian golden eagle caught a moment after flying from its master’s glove—and even the album title, reflect the sense of total dedication that serves as the driving wheel of TTB.

Like the group’s other recordings, Let Me Get By benefits from a number of musical elements that have become TTB trademarks: their deep sense of American roots music: rock, blues, soul, and especially gospel. Their balance of easy-flowing song structures and soaring, improvisational sections. Tedeschi’s spiritually charged vocals, and Trucks’s wide range of guitar tones, slide and picked, from back-alley, distorted rawness to Indian sitar-like sinuousness.

There are a number of characteristics that differentiate the music on this new album. One is a clearer, more mature musical identity that comes through a generous array of musical moods and feels. Tedeschi credits it to the inside familiarity among the group’s members: “the album didn’t come from any outside influence. This is the first time it’s all in-house, so I feel it’s really a good look at the actual band in action, how we communicate together.” Trucks agrees, adding that “the band is in a better place than it’s ever been that way. When everybody would be in the room anyone could just throw out ideas and everybody’d be willing to listen. You have to really trust each other and not be afraid of getting your feelings hurt. That’s more how it was at the beginning but now it’s a fun process, with everyone contributing.”

Another growth ring is a sense of expansion to TTB’s sonic signature. There’s an increased focus on Tedeschi’s powerful guitar playing (especially on “Don’t Know What It Means,” in which she solos powerfully before her husband’s guitar statement. As well, the album features the first lead vocals on a TTB album by Mike Mattison (on “Crying Over You” and “Right On Time”), whose mastery as a lyricist and songwriter has always been a central part of the TTB sound.

For Trucks, Let Me Get By is concrete evidence that the band is on the right track, and that more singular music will continue to flow from the expansive yet tightly connected musical family TTB has become. “There’s a lot of sacrifice that goes into a band like this and the fact that everybody’s on board musically, hearts and minds, makes it very humbling. There are nights on stage when I think I don’t know if it’s ever been more fun to be in a band and be on the road and be alive than it is right now with a group like this. For me, that’s the joy and the thankfulness that comes across in Let Me Get By.

“Susan and I take that seriously and at the same time, Susan started a kind of joke about it. After shows, she started to say to everyone, ‘Thanks for letting me be in your band’ and we’d all laugh. Now we all say it.”