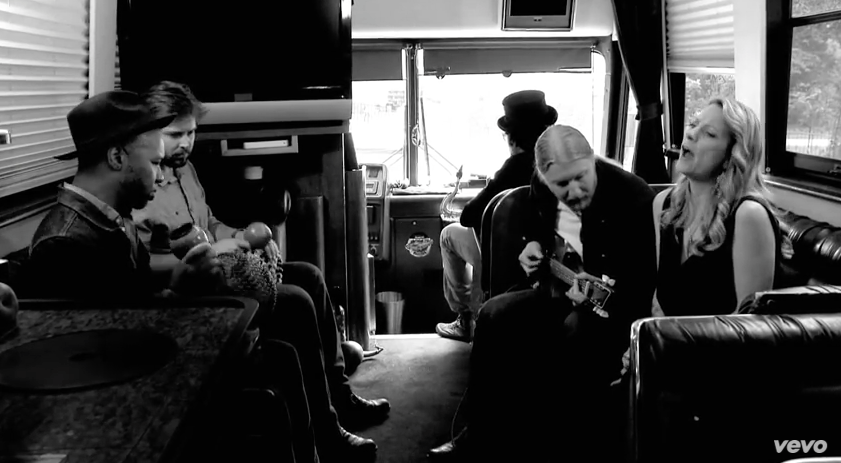 As Tedeschi Trucks Band travels to Europe for the first time as a group, we're pleased to have a special correspondent reporting from the road. Please welcome Stuart, who will be with the band for every step of their journey: As Tedeschi Trucks Band's world tour crosses the Atlantic, what better place to enter the motherland of western culture then London? One of the few places that can hold a candle to the U.S. as far as as rock n roll goes, the TTB came out on fire and showed this crowd what they were all about. Armed with an album full of originals that Europeans had never heard performed live on their own soil, the band started off their tour at full force. Having had the full lineup only together for less than a year, it's remarkable how much this ensemble's chemistry has grown already. No song is ever played exactly the same way twice, which gives all the players room to experiment with the material allowing it to evolve. That was made quite apparent here in London. Derek and Susan arrived a few days early to go sit in with B.B. King at Royal Albert Hall, much to B.B. and the crowd's enthusiasm, as well as theirs. B.B. was also joined by Ronnie Wood, Slash, and Mick Hucknall. The next night at Shepherd's Bush, as Derek tore through Eric Clapton's "Anyday," complete with "Blue Sky" tease, Derek proved his skills at paying homage to the greats. Sly Stone's "Sing A Simple Song" showed off the band's love of classic funk, and it was during this song a TTB crew member spotted Steve Winwood in the balcony clapping his hands and singing along to the chorus. He surely wasn't the only one in this packed house that was excited. As fun as the covers can be, the best part of this new group is the progression of the original material. The songs off "Revelator" are taking on their own personalities more and more every night, and its quite exciting to watch them evolve. For instance, Derek was throwing in new riffs and breaks into "Bound for Glory" tonight that may were not on the album, but sounded phenomenal and gave the song new dimensions. Susan did the same thing with "Love Has Something Else to Say" as she stepped up with some heavy guitar slinging of her own. When they play these again in a couple days, listeners will hear different nuances that may have not been there the previous show. Either way, the songs stay fresh and the musicians remain inspired. That's what keeps the tour exciting for the players and listeners and is what has driven these musicians to make this project their main focus. I was amazed tonight at how much each member of this 11-piece band got to stand out at one point or another. Every player in the group had a chance to shine which in turn inspired everyone on the stage, and in the crowd. I remember Derek telling me a few months back at a one-off gig in south Georgia, how he was ready and excited to get this band on the road. Now it's happening, and it will be a revelation to audiences worldwide. Stay tuned as we continue to get revelated overseas. -Stuart Raper European Tour Correspondent & Man About Town