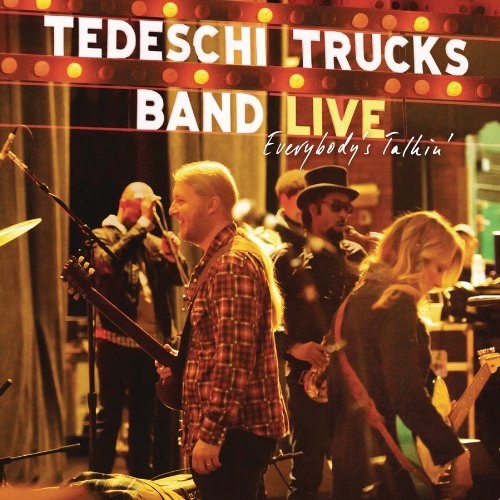 Today's the day Everybody's Talkin', the second album from Tedeschi Trucks Band, is available in stores and online retailers everywhere. Only a few short months after winning a GRAMMY for their debut album Revelator, the release of this 2-CD live album adds to TTB's growing reputation as a powerful live act. The album features original TTB songs, including a previously unreleased gem in "Nobody's Free," as well as nods to the band's inspirations with covers of Stevie Wonder, Muddy Waters, Bill Withers and Joe Cocker, Everybody's Talkin' illustrates the spirit and flow of a TTB concert. From the swells of "Midnight in Harlem" to the incendiary "Learn How to Love" and "That Did It," right on through "Darling Be Home Soon" and the near-whisper coda of "Wade in the Water," Everybody's Talkin' is a journey for the mind and a work out for the soul. Each member of the powerhouse band gets their moment to shine in the spotlight, but it's those moments when all 11 players are locked in together and driving the songs forward that the full power of Tedeschi Trucks Band is revealed. There's show-stopping vocals and brilliant solos throughout, but the quality of the recording allows for a revelation or two on each listen. Turn it up loud and dig in to Everybody's Talkin'. Special thanks to all the fans who pre-ordered and helped to get Everybody's Talkin' on the Billboard Blues charts and in the top ten of Amazon. Available almost anywhere that sells music now (available in France/U.K./Ireland on June 4). TTB Official Store Amazon iTunes Barnes & Noble Everybody's Talkin' Produced by Derek Trucks Mixed by Jim Scott Engineered by Bobby Tis Disc 1 1. Everybody’s Talkin’ 2. Midnight in Harlem (Swamp Raga Intro with Little Martha) 3. Learn How to Love 4. Bound for Glory 5. Rollin’ and Tumblin’ 6. Nobody’s Free 7. Darlin’ Be Home Soon Disc 2 1. That Did It 2. Uptight 3. Love Has Something Else to Say (With Kissing My Love) 4. Wade in the Water Tedeschi Trucks Band: Derek Trucks (guitar) Susan Tedeschi (guitar, vocals) Oteil Burbridge (bass guitar) Kofi Burbridge (keys, flute) Tyler Greenwell (drums, percussion) J.J. Johnson (drums, percussion) Mike Mattison (harmony vocals) Mark Rivers (harmony vocals) Maurice Brown (trumpet) Kebbi Williams (saxophone) Saunders Sermons (trombone, vocals)